Originally from Germany, I have been living in Spain for more than 30 years. I have specialized in enhancing creativity and communication as well as promoting the cultural tradition of millennial mosaic art and the “Trencadis” technique. While I was still a child, my mother, Martha, sparked my passion for the arts . When I came to Barcelona , I was impressed by the works of Miró, Dalí, Picasso, and especially the genius of Antonio Gaudí.

I was able to reconcile my career in multinational companies with the advancement of my passion by attending specialized courses in arts and mosaic arts, both in Spain and other countries . During the past 25 years of my professional life, whether working with multinational companies or on a freelance basis, I discovered that communication among the employees from different departments is key to corporate success . Bad communication undermines motivation. In the past years, I have dedicated myself to corporate training issues – so I gave lessons on business German and organized the Teambuilding and Events seminars for groups and companies. I love my work and it is my objective to make employees identify with their company and get along with their colleagues nicely and, in group Events we love to teach each participant to design and create his/her own work of art.

Today, with my Studio MOSAICCOS, a long-standing dream has come true and I am excited about what I am doing: With Teambuilding and Eventos “Experiencia Gaudí” I combine arts with company and group objectives.

Moreover, in my special mosaic classes, I teach children and adults to unleash their creativity and create artworks of their own which can be used to decorate their homes or as a present for their loved ones. And I also create and sell all kinds of decorative mosaic artworks. 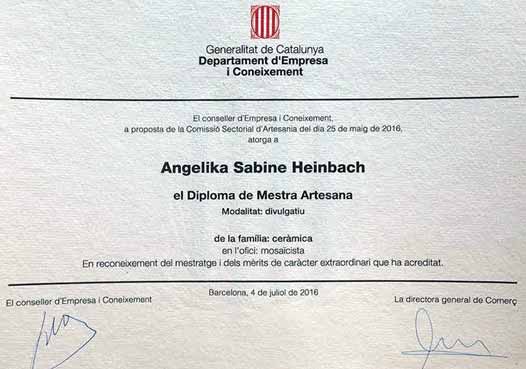 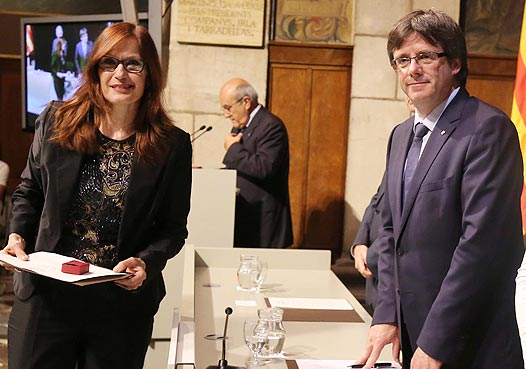 Diploma accredited for Excellence “Mestre artesà divulgatiu” (Master craftsman`s certificate) in the work and divulgation of this Art, awarded by the President of the Generalitat de Catalunya, Carles Puigdemont I Casamajó at the Palau de la Generalitat (4.7.2016)

2019/2018/2017/2016/2015: Modernisme Fair Barcelona
Collaboration with Torre Bellesguard at the Modernism Fair of Barcelona, offering Trencadís mosaic and mosaic workshops for the children and adults.

May 2017: Collaboration with Crypt Gaudí and Council Office of Barcelona
Trencadís mosaic workshop in the Colonia Güell during the “Costa Barcelona Week”

July 2016: Awarded by the President of Catalonia: Master´s diploma
Master’s diploma craftswoman. In recognition of master’s degree and merits of extraordinary character that she has accredited and divulgation of this art.

April 2016: Colonia Güell and Crypt of Gaudí
Collaboration with Colonia Güell: Activities for families: Creation of a macro mosaic, the motive of the Crypt of Antonio Gaudí, that is hanging at the entrance of the museum.